Bengaluru:The National Confederation of Human Rights Organisations (NCHRO) is extremely saddened by the passing of Girish Karnad , the illustrious playwright and actor. The nation has lost an inspiring man, a great humanist and a defender of civil rights.

A highly regarded public intellectual acted with independence and integrity, he often became the target of the Hindutva right, most notably for his views on Mysuru king Tipu Sultan, on whom he has authored a play.

Fearless social and political activist, Girish Karnad, was also one of the 200 writers who issued an appeal to fellow Indians in April 2019 to vote out hate politics in the Lok Sabha elections and vote for a “diverse and equal India”.

He supported countless human rights campaigns and was a voice that championed the freedom of expression.Girish Karnad wore a sign around his neck that read ‘Me Too Urban Naxal’ at an event to mark the first death anniversary of journalist-activist Gauri Lankesh, mirror his steadfast belief in justice, human rights and equality.His legacy will enrich our collective intellectual and creative consciousness for generations to come.

Our deepest condolences to his family and fans around the world. 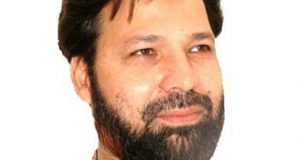