Israel minister under fire for drone gift to Russian PM

An Israeli minister who decided to give a drone as a gift to visiting Russian Prime Minister Dmitry Medvedev came under fire after it emerged it may contain sensitive technology.

Israeli Agriculture Minister Uri Ariel gave Medvedev a tour of a research centre last week and reportedly asked him if he wanted the drone on display there as a gift after the Russian premier took an interest in it.

Footage broadcast on Israeli television showed Medvedev enjoying himself flying the drone with its remote control. 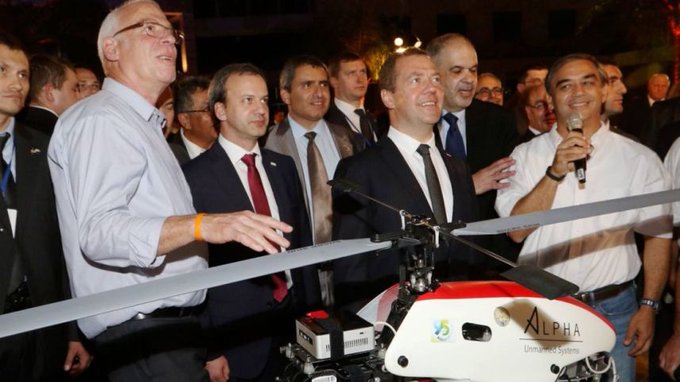 Israel’s drone gift to Medvedev could lead to trouble with U.S. – and Russia

Medvedev accepted the gift – but it was not clear whether Ariel was allowed to give it away.

Israeli media reported on Tuesday that not only was the drone worth as much as $50,000, but it also may have contained technology not meant to be shared.

The drone was made by Spanish company Alpha Unmanned Systems, while its thermal camera was from US company Flir, the Jerusalem Post reported.

There were also reports that Medvedev did not receive the remote control or the thermal camera with the drone.

staff at the Volcani Centre, which carries out agricultural research, had so far refused to give the components away.

Ariel’s ministry issued a statement acknowledging that the drone was given to Medvedev, but said the gift had been approved by “the relevant professional officials”.

The ministry will quickly purchase a new drone to replace it, the statement said – though some pointed out that this would have to come at taxpayers’ expense.

The Movement for Quality Government in Israel called for Ariel to pay for the drone from his own pocket.

Nachman Shai of the opposition Zionist Union said the minister from the far-right Jewish Home had been duped into handing “knowledge and technologies to the wrong countries”.

Stav Shaffir, a lawmaker also from the Zionist Union, called for Ariel’s resignation.

The Volcani Centre and Israel’s foreign ministry refused to comment.

Salman Rushdie is stabbed on stage 33 years after fatwa, in NY hospital.